The Tongariro National Park has had a violent past and was formed by multitude of eruptions from at least six different cones. The oldest lava started flowing about 275,000 years ago, near what is now the Tama Lakes on the southern flanks of Mt Ngauruhoe. The eruptions continued until the Ice Age, as the ice retreated, it carved out valleys clearly visible in the lower Mangatepopo valley, on the Tongariro Alpine Crossing and into Oturere valleys on the Northern Circuit.

Red Crater and Mt Ngauruhoe are the most recently formed features on the Tongariro Alpine Crossing with Red Crater formed about 3000 years ago. It lies within a scoria cone which rests on top of the older Tongariro lava flows. The red colour is due to the presence of oxidised iron in the rock. The volcanic activity from Red Crater was reported between 1855 and 1890. The dike on the Southern Wall has been exposed by erosion; lava would have flowed through this dike and poured into the Oturere Valley.

Mt Ngauruhoe is the youngest volcano in the area having begun to form about 2,500 years ago. It is the most active vent in the Tongariro area with its last eruption recorded in 1975. The most recent flows from Mt Ngauruhoe are easily visible on the way to South Crater. The Te Maari crater on the northern flank of Tongariro and is not on the Tongariro Crossing but is 1.5 kilometres from the Ketetahi Hut last erupted on the 6th of August 2012. 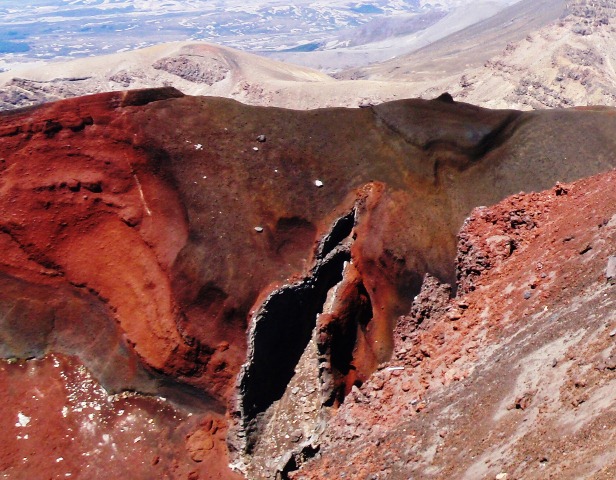